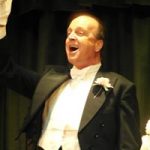 Philip has appeared in Music Hall all over the country with Miss Jan Hunt’s Magnificent Music Hall and the Players Theatre London. His other work includes major West End Shows, performances with the Royal Shakespeare Company and television appearances including The Bill and The Lavender List. Philip has also appeared in the film White Mischief and recorded many musicals as a sessions singer for That’s Entertainment Records.