↓
Welcome to the website of the Players’ Theatre Club. We are the legitimate heirs of the club formed over 80 years ago (see About the Players) and recognise our responsibility to preserve and hand on our inheritance. To meet this responsibility, we are the only club dedicated not just to performing traditional Victorian music hall, but to seek out, train and provide performance opportunities to new music hall artistes.

Book now at charingcrosstheatre.co.uk or by calling the box office on 08444930650 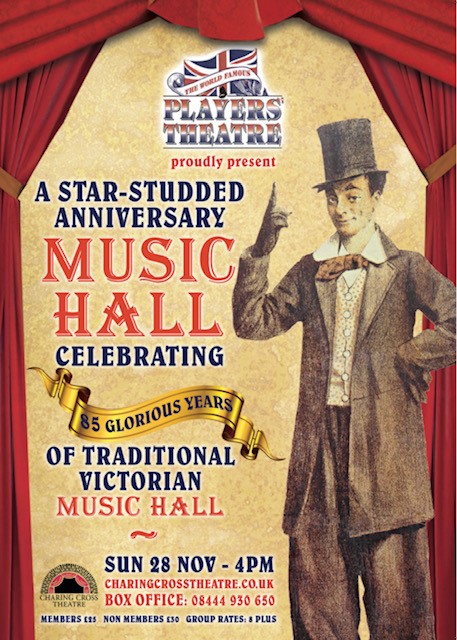 Throughout the lockdown of the Pandemic, we put on two successful virtual shows on YouTube which you can view here:

We have resumed shows at the Museum of Comedy and also member evenings at the Roebuck pub in Great Dover St, London SE1. See Forthcoming shows for details.

WE ARE DELIGHTED TO LET YOU KNOW THAT WE ARE ‘BACK HOME at the CHARING CROSS THEATRE !

PLEASE PUT THE DATE IN YOUR DIARY.

BOOKING DETAILS WILL BE AVAILABLE SOON

We are delighted to resume our traditional ‘Eve of the Eve’ parties.

The format will be as always. Bill Halson will assemble a galaxy of Music Hall artistes who will perform in the splendid Sovereign’s room at the Royal Air Force club (128 Piccadilly).

Guests assemble c 6.30 and have half an hour in the Churchill bar, ordering drinks to consume immediately or during the show.

At 7.00 they take their seats at tables in the magnificent Sovereign’s room (formerly the Ballroom) for the first half of the show, which runs to 8.00, when dinner is served.

For the benefit of those who in the audience who can both read and sing, we will provide song-sheets to assist participation in the choruses.

Food is an important part of the tradition: the club chef provides a luscious Steak and Kidney pudding, served in a traditional pudding bowl with lashings of suet pastry. This is no longer on the club menu: it is made specially for us.

The dessert is an equally traditional Sherry trifle, followed by tea or coffee and petits fours. (Alternatives are available for non-carnivores and slimmers)

After supper we resume for the second half: guests should order their carriages for 10. 30, by which time, in anticipation of the following night, we shall have joined in a spirited rendition of Auld Lang Syne.

However, we also offer a discount to £75, for parties of 6 or more, or members of some other specific organisations, (e.g. Concert Artistes’ Association; Chelsea Arts Club, Marylebone Association, Royal British Legion). If you belong to an association and wish to qualify for a discount, email Bill@playerstheatre.co.uk.

Bill Halson is in the process of booking artistes, having already secured an Orchestra (led by our regular: Laurence Payne), a Master of Ceremonies (Clive Greenwood another regular straight from his inimitable role as Father Christmas in Harrods), Jan Hunt (former blue-eyed blonde in Cracker Jack and Director of the “good Old Days” show, still running at the Leeds Palace of Varieties) , Peter John (sometimes visible as a fairy: (https://www.youtube.com/watch?v=TVjG64S-O1Q) though more likely be bar-maiding on this occasion), Lola McDowell – (a genuine Pearly Queen), Andy Eastwood – (a brilliant ukulele player, Philip Day (a greatly loved ladies’ man!), Fay Presto (a remarkable magician) and Martin Milnes (a superb singer with two distinct vocal ranges).

As the company develops, there will be further updates of this page.We can take a maximum of 96 guests. In 2019, thanks to a minor cock up on the booking front we had 98, which involved some unanticipated intimacy on the sitting front.

Join the Players’ Theatre today and continue a tradition going back to the 1930s! Players’ Associates receive our regular newsletter and receive discounts off all shows.
Find out more

KEEP UP WITH OUR NEWS