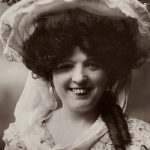 Marie Lloyd, the 'Queen of the Music Hall', was born Matilda Alice Victoria Wood in London on 12 February 1870. She first appeared at the Eagle Tavern in London aged 15 as Bella Delmare, singing 'My Soldier Laddie'. By 1885 she had become Marie Lloyd with her hit song 'The Boy I Love is Up in the Gallery'. She was a huge success and topped the bill at the West End music halls.

Marie received both criticism and praise for her use of innuendo and double entendre during her performances, but enjoyed a long and prosperous forty-year career. She is remembered for several classic music hall numbers, including 'My Old Man (Said Follow the Van)' and 'Oh Mr Porter What Shall I Do'.

In 1912 she was omitted from the Royal Variety Performance for fear of offending the Royal party, but in true style rented another theatre for the same night and played to sell-out audiences.

Her reputation for being socially unacceptable came partly from her stage act but also from her private life. She had three unsuccessful and very public marriages. In 1913 she was refused entry into the USA because she had shared a cabin with her new boyfriend on the voyage, despite still being married to her first husband. In 1922, she gave her final performance at the Alhambra Theatre, London, during which she became ill on stage. She died a few days later at the age of 52.

A number of Marie Lloyd's songs can be found on YouTube, eg:

Marie Lloyd "When I Take My Morning Promenade" British music hall classic
Marie Lloyd "A Little Of What You Fancy Does You Good!" LYRICS ARE HERE
"Don't Dilly Dally on the Way--Cock Linnet Song" LYRICS HERE "My Old Man"