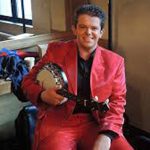 Mark appears all over the World in Theatre shows and in Cabaret. In recent years he has become a regular guest on BBC Radio 2 on the long running programme 'Friday Night is Music Night'
Born in London in 1986 Mark has been working on stage from the age of 8. His first professional engagement was given to him by the legendary Danny La Rue and the two worked together for many years.
Mark is regarded as one of the finest ukulele players in the world today. He has appeared with some of our greatest stars including Dame Barbara Windsor, Dame June Whitfield and the late Danny La Rue. Mark and Danny La Rue were great friends and Mark appeared in Danny’s tribute show at the World Famous London Palladium. Since 2012 Mark has been a regular guest performer on BBC Radio’s “Friday Night is Music Night” with live shows coming from the Hackney Empire London.
Mark also travels the UK as a speaker giving talks on his theatrical career, the history of music hall and variety, and on the iconic BBC Sitcom ‘Dad’s Army’.