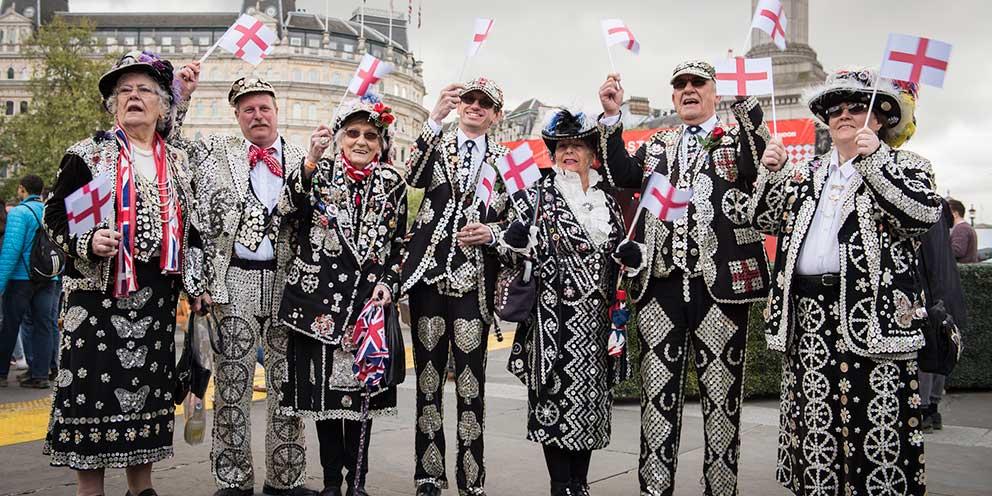 Fairs, fetes, fun-days and festivals are an integral part of English culture, and Feast of St George perfectly fits the bill. On Saturday 21 April, there's no better excuse to wave a flag, enjoy tea, cake and great entertainment, all in the surrounds of iconic Trafalgar Square.

The event promises a strong and varied live music programme with traditional and contemporary acts, including a 25-piece brass band, pop and folk groups, Victorian music hall, and showcase for young musicians.

The Players' Theatre will bring to Trafalgar Square an exuberant and joyful performance featuring some of the best known music hall songs. Led by Jan Hunt, chairman Peter John, singers Julia Sutton, Judith Hibbert and Mickey Driver, plus dancers from Laine Theatre Arts school choreographed by Lucie Spencer, the show will include a tribute to female stars of yesteryear such as Marie Lloyd, Florrie Ford and Gracie Fields.

Very special guest will be Anita Harris , whose stage, screen and recording career spans over fifty years. She has worked with many legendary artists from the world of entertainment, appeared in two Carry On films, enjoyed success in the pop charts, played the role of Peter Pan in pantomime, and starred in Cats in the West End. Anita will portray the music hall artist Vesta Tilley, famous for her performance of 'Burlington Bertie'.

For more information, visit the Mayor of London website

Congratulation to Sheila Bernette who, at our 85th anniversary show, won the luck prize draw of a meal for two at Oslo Court Restaurant! Sheila has performed many times at The Players over the years. In the 1966 video clip at The Players (‘A little of what you fancy’ documentary which actually came out in […]

WEDNESDAY 23rd MARCH at 7pm Do join us for another marvellous evening of music, merriment and mayhem at The Roebuck, 50 Great Dover Street, London SE1 4EG  BEN STOCK and West End leading lady JESSICA MARTIN will be performing for us! Admission: £12.50 on the door (includes interval snackettes!)

Read More
We are 'back home' at the Charing Cross Theatre!
Mike Halson
No Comments

We are delighted to let you know that we are ‘back home at the Charing Cross Theatre ! Please join us on Sunday, November 28th 2021 for a star studded anniversary music hall extravaganza, celebrating 85 glorious years!

Read More
CONTACT US
Please use the form below or contact us by emailing our club chairman Rev. Lee Taylor: frleetaylor@hotmail.co.uk

Our Venues
Contact us
frleetaylor@hotmail.co.uk
© Copyright 2021- The Players' Theatre - All Rights Reserved
Designed by Atomic Brew Studios
We use cookies on our website to give you the most relevant experience by remembering your preferences and repeat visits. By clicking “Accept All”, you consent to the use of ALL the cookies. However, you may visit "Cookie Settings" to provide a controlled consent.
Cookie SettingsAccept All
Manage consent

This website uses cookies to improve your experience while you navigate through the website. Out of these, the cookies that are categorized as necessary are stored on your browser as they are essential for the working of basic functionalities of the website. We also use third-party cookies that help us analyze and understand how you use this website. These cookies will be stored in your browser only with your consent. You also have the option to opt-out of these cookies. But opting out of some of these cookies may affect your browsing experience.
Necessary Always Enabled
Necessary cookies are absolutely essential for the website to function properly. These cookies ensure basic functionalities and security features of the website, anonymously.
Functional
Functional cookies help to perform certain functionalities like sharing the content of the website on social media platforms, collect feedbacks, and other third-party features.
Performance
Performance cookies are used to understand and analyze the key performance indexes of the website which helps in delivering a better user experience for the visitors.
Analytics
Analytical cookies are used to understand how visitors interact with the website. These cookies help provide information on metrics the number of visitors, bounce rate, traffic source, etc.
Advertisement
Advertisement cookies are used to provide visitors with relevant ads and marketing campaigns. These cookies track visitors across websites and collect information to provide customized ads.
Others
Other uncategorized cookies are those that are being analyzed and have not been classified into a category as yet.
SAVE & ACCEPT