Location
The Museum of Comedy

As we proudly fulfil our promise to always  keep the flag flying for Music Hall with quality shows and  coaching  exciting new, young talent we present “Your own, your very own  ‘Stars in their Eyes’  who will perform for you in our

Ten, young performers will pay tribute to many of the music hall greats in song, dance, comedy and magic so, do please come along and enjoy their performances as they enter the wonderful genre of traditional Music Hall entertainment. They will  be warmly introduced to you by our one and only eloquent and elegantly waistcoated:  CHAIRMAN -  MR KEVIN GAUNTLETT  and ably and magnificently musically managed by our -    MASTER OF THE KEYS - MR CHARLES MILLER .

*A wonderful afternoon awaits the pleasure of your company*

Tickets : £18 for members £21 for non-members. Tickets may be booked through the Museum of Comedy website.

Grace is a Scottish actor born and raised in Fife. After training at The MGA Academy of Performing Arts where she gained her degree, Grace then went on to study at The London School of Musical Theatre in 2021. Her credits while training include Janet Van De Graaff in ‘The Drowsy Chaperone’ at The Union Theatre and Audrey in ‘Little Shop of Horrors’ at The Leith Theatre. Grace also performed as Phebe in ‘As You Like It’, Wendla in ‘Spring Awakening’ and Beth in ‘Merrily We Roll Along’ (all excerpts).

Jenny loves to write funny songs and characters and has performed all over the country at all sorts of gigs from variety shows and cabarets,  comedy and acoustic music nights, school assemblies, radio, festivals, people's living rooms and once for the queue in the local chemist.  Jenny has devised numerous shows including a solo show about the pilot Amy Johnson and two shows for children. She also runs her own live music sessions for babies and toddlers in London and South Wales. Jenny has been writing and performing comic monologues and sketches since school and performing her own mix of character and comic songs professionally since 2003. She takes inspiration from Music Hall and variety and says that An Audience With Victoria Wood remains one of the best couple of hours of comedy she has ever seen. 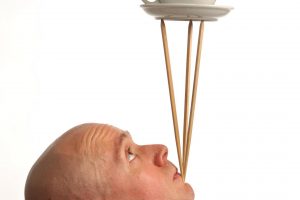 He offers a variety of different shows including:

Cabaret: Mr. Marchant is comfortable performing on cabaret stages, in theatres, aboard cruise ships or even in your front room and can perform either to music or as a verbal act with comedy patter.

The Art of Plate Spinning: Spinning nine plates at once, this fast-paced routine is perfect for almost any event. If plate spinning is not enough don’t fret, there will be many other clever feats and tricks performed along the way.

Mr Marchant is one of a handful of performers to still be performing plate spinning in the UK. 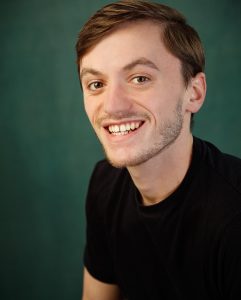 Originally from Portsmouth Eddie attended Marie Clarke School of Dance and Italia Conti Academy of Theatre Arts before Graduating from the London School of Musical Theatre earlier this year.

Eddie was the first Child Narrator in Into The Woods at Regents Park Open Air Theatre and performed at the Olivier Awards where the company won Best Musical Revival. With the National Youth Music Theatre Eddie performed in 13 The Musical, The Other School, Pendragon and Growl.

His professional credits include the Original West End cast of 13 The Musical at the Apollo Theatre directed by Jason Robert Brown, Toby in Chitty Chitty Bang Bang at the Mayflower Theatre and Winthrop in The Music Man at Chichester Festival Theatre.

Whilst in training Eddie performed as George in the Dorwsy Chaperone at The Union Theatre, Touchstone in As You Like It and in workshop performances of Merrily We Roll Along and Spring Awakening. 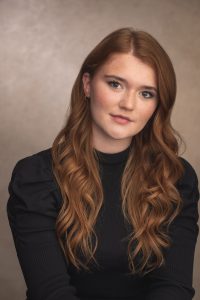 Georgia originally from Wales, trained at The London School of Musical Theatre, graduating in February 2022. Prior to this she studied at The Guildford School of Acting where she completed a Foundation course in Musical Theatre.

Credits whilst training: Kitty in THE DROWSY CHAPERONE (The Union Theatre) and Wendla in SPRING AWAKENING Workshop (LSMT Studio). 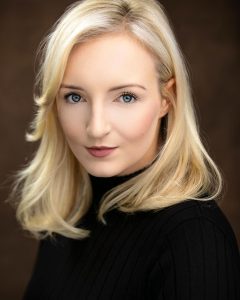 Alice began her training at The BRIT School for Performing Arts and then went on to complete her professional musical theatre training at Laine Theatre Arts.
Alice has performed in Music Hall shows numerous times with the Players Theatre Music Hall and Paper Moon Theatre Company company at venues such as Museum of Comedy London, Mercury Theatre Colchester and New Wimbledon Theatre.
Previous to this Alice made her West End debut in Les Miserables at The Queen’s Theatre, Shaftesbury Avenue understudying and playing both the lead roles of Eponine and Fantine.  Other credits include Princess Aurora in Sleeping Beauty (The Castle Theatre, Wellinborough) The Nurse in Hello Again (The Union Theatre) and Princess Jasmine in Aladdin (Capitol Horsham). Alice has also sung around the world as a lead vocalist on Celebrity Cruise Lines and on BBC Radio 2 with the BBC Concert Orchestra for Friday Night is Music Night. 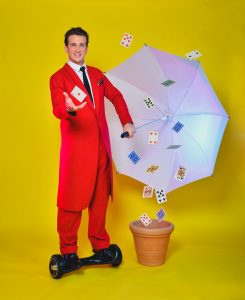 Crazy comedy conjurer Danny Lee Grew has presented his unique magic all over the world from France to Spain, USA to Ireland, and from Kuwait to Bahrain. He became a Member of The Magic Circle at the age of 18 and recently promoted to Associate Member of the Inner Magic Circle with Silver Star for Performance. Danny performs his comedy magic for audiences all over the world, but has also appeared in pantomimes and Britain's longest running summer variety show at the West Cliff Theatre in his hometown of Clacton on Sea. 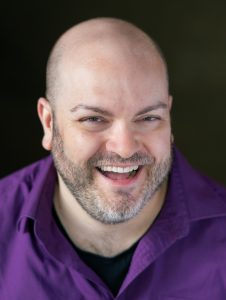 David trained as a classical singer at the Guildhall School of Music and Drama. Roles in musicals and operas include: Gastone in Jonathan Miller’s production of La Traviata; Bunthorne in Patience at both the Kings Head Theatre, London, and the International G&S Festival, Harrogate; Mr. Bumble in Daniel Evans’ production of Oliver! at the Crucible Theatre, Sheffield; and Auctioneer/Jeweller/Passarino (also covered and played Firmin, Piangi and Buquet) in The Phantom of the Opera.

David is a critically acclaimed pantomime performer, director and writer. Over twenty appearances (primarily as dame) include seasons in Woking, Southend, Chatham, Barnstaple, Ipswich, St Helens, Maidstone, Worthing and Camberley. As a director, David has staged over forty productions of pantomimes, plays, musicals and operas. His production of Ruddigore was Time Out critics’ choice, and Who Will Carry the Word? and See Me for Myself were both nominated for Off West End Theatre Awards.

David has appeared extensively in music hall, for the Players Theatre, Paper Moon Theatre Company and Brick Lane Music Hall, as both a tenor and as his alter ego Dame Fanny Farde. 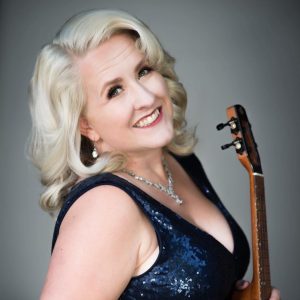 Amanda graduated from Goldsmiths, London with an Undergraduate Degree in Classical Music and from The Royal Central School of Speech and Drama with a Master’s Degree in Musical Theatre.
Amanda has been a regular company member at The Criterion Music Hall, Blue Town and through these has gained a true love of Music Hall.
She currently can also be seen across the UK with The Company Upfront – a team who provide interactive murder mysteries for parties and corporate events.
She is also living a childhood dream by becoming a “Maze Master” at the Crystal Maze Live Experience in London. An immersive theatrical event where guests are thrown into their own episode of the classic cult 90’s show.
Amanda is also one half of the worlds only operatic ukulele duo ‘Opera-lele’. Yes you read that right! Fusing the magic of Opera and Musical Theatre with the twang of the ukulele. The duo have toured the length and breadth of the UK and have also found themselves going international with performances in Finland, Czech Republic, Poland and Berlin. 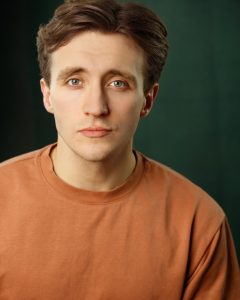 Originally from Brighton, Ollie has recently graduated from The London School Of Musical Theatre.

His professional and fringe credits include Melchior Gabor in Spring Awakening, Bobby Strong in Urinetown, Henrick Egerman in A Little Night Music, Matt in Bare: A Pop Opera, Rudge in The History Boys, Guy Bellingfield in Posh as well as multiple touring productions across the UAE.
His credits in training include Adam/Noah in Children Of Eden, Frank in Merrily We Roll Along (Workshop) Melchior Gabor in Spring Awakening (Workshop) and Orlando in As You Like It (Workshop) 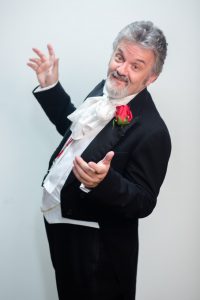 The Players’ Theatre are looking for talented Music Hall performers. Whether you are a variety act, magician, juggler, comic, ventriloquist, acrobat or singer. We would love to hear from you. Auditions will be held on Friday 25th February at (tbc) Please email playerstheatreclub@gmail.com with a brief description of your act and your CV.

As we proudly fulfil our promise to always  keep the flag flying for Music Hall with quality shows and  coaching  exciting new, young talent we present “Your own, your very own  ‘Stars in their Eyes’  who will perform for you in our *NEW FACES MUSIC HALL SHOW*  3.30PM  SUNDAY, MAY 1 at THE MUSEUM OF […]

Read More
Love is in the Air
Lee Taylor
No Comments

To celebrate their first appearance at The Phoenix Arts Club London’s famous Players Theatre proudly presents A Valentine ‘Music Hall ‘ Special “ LOVE IS IN THE AIR” taking you , for your delight and delectation, on a glorious trip down memory lane to the golden era of traditional Music Hall ‘blooming’ with red roses, […]

Read More
CONTACT US
Please use the form below or contact us by emailing our club chairman Rev. Lee Taylor: frleetaylor@hotmail.co.uk

Our Venues
Contact us
frleetaylor@hotmail.co.uk
© Copyright 2021- The Players' Theatre - All Rights Reserved
Designed by Atomic Brew Studios
We use cookies on our website to give you the most relevant experience by remembering your preferences and repeat visits. By clicking “Accept All”, you consent to the use of ALL the cookies. However, you may visit "Cookie Settings" to provide a controlled consent.
Cookie SettingsAccept All
Manage consent

This website uses cookies to improve your experience while you navigate through the website. Out of these, the cookies that are categorized as necessary are stored on your browser as they are essential for the working of basic functionalities of the website. We also use third-party cookies that help us analyze and understand how you use this website. These cookies will be stored in your browser only with your consent. You also have the option to opt-out of these cookies. But opting out of some of these cookies may affect your browsing experience.
Necessary Always Enabled
Necessary cookies are absolutely essential for the website to function properly. These cookies ensure basic functionalities and security features of the website, anonymously.
Functional
Functional cookies help to perform certain functionalities like sharing the content of the website on social media platforms, collect feedbacks, and other third-party features.
Performance
Performance cookies are used to understand and analyze the key performance indexes of the website which helps in delivering a better user experience for the visitors.
Analytics
Analytical cookies are used to understand how visitors interact with the website. These cookies help provide information on metrics the number of visitors, bounce rate, traffic source, etc.
Advertisement
Advertisement cookies are used to provide visitors with relevant ads and marketing campaigns. These cookies track visitors across websites and collect information to provide customized ads.
Others
Other uncategorized cookies are those that are being analyzed and have not been classified into a category as yet.
SAVE & ACCEPT